Leprosy is a mildly infectious disease caused by a bacillus called Mycobacterium leprae (a relative of TB). It is most common in places of poverty – overcrowding and poor nutrition mean people’s immune systems are not strong and they are less able to fight the disease.

Leprosy causes nerve damage and, if left untreated, leads to a loss of sensation in the hands and feet meaning everyday activities are fraught with danger. Burns go unrecognised and stones in shoes unnoticed causing ulcers and infections to develop, leading to the shortening of limbs. Leprosy also damages nerves in the face causing problems with blinking, the body’s natural defence mechanism to protect the eyes.

Robbed of this simple action a person can go blind. 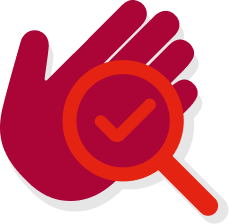 The first signs of leprosy are patches of skin which look paler than normal or sometimes nodules on the skin. It can be difficult to diagnose and sometimes people are misdiagnosed. The Leprosy Mission is experienced in diagnosing leprosy and works with governments around the world to ensure that medical staff are adequately trained.

If leprosy is not treated it will attack the nerves that supply feeling to the hands, feet, eyes and parts of the face. This means that when people injure themselves, they do not feel pain, so they don’t notice their injury. Untreated leprosy can also cause muscle weakness and paralysis, leading to ‘clawed hand’, when the fingers weaken and curl up; ‘foot-drop’, when the muscles that lift the feet no longer work properly. It can also lead to an inability to close the eyes due to paralysis of the eyelids. These effects put a person affected by leprosy at high risk of further damage.

Some people experience reactions to the leprosy bacteria still present in their body, even once those bacteria are no longer active. These reactions can cause pain, sickness, swelling of the skin and fever, and are hard to treat.

In some countries, largely due to myths and superstitions, there is a great deal of fear associated with leprosy – people diagnosed with the disease can be stigmatised, rejected by their families and communities, they may lose their jobs and end up without a source of income, some lose their homes. The Leprosy Mission cares for the whole person – we are a holistic charity, focusing on the physical, social, spiritual and psychological needs of leprosy-affected people.

Scientists are not 100% sure how leprosy is passed on, and research is ongoing. Most scientists believe that leprosy is caught through droplets of moisture passing through the air from someone who has untreated leprosy.

Symptoms can be slow to appear and it may be five or ten years before the disease appears after initial exposure.

There is a higher likelihood of transmission where people have close and ongoing contact – for example, living in the same house. Leprosy is also more prevalent where overall nutrition and hygiene is lower. However, around 95% of the world’s population are naturally immune to leprosy.

someone is diagnosed with leprosy

with a full course of multi-drug therapy

Multi-drug therapy (MDT) is the treatment for leprosy that has been recommended by the WHO (World Health Organization). MDT emerged in the early 1980s and is highly effective and freely available.

MDT is a combination of antibiotics and is currently made available free of charge by Novartis through the WHO. Within two days of a patient starting MDT treatment, there is no risk of the disease spreading to anyone else.

These drugs need to be taken every day for either six or twelve months.

Although ‘cured’ of leprosy approximately 20% of people affected by leprosy suffer from reaction: where the body has an adverse reaction to the dead mycobacterium leprae.  This is very painful and can involve many years of steroid treatment, which needs to be carefully monitored by a doctor specifically trained in treating leprosy complications.

There have been amazing medical breakthroughs that enable us to help people who have been disabled due to leprosy in a variety of ways. A clawed hand or foot-drop (due to nerve damage) can often be restored with surgery and physiotherapy, though they can’t restore feeling. Surgery can also restore eyelid muscles so a person can blink again. To protect insensate feet and hands, people are encouraged to look after themselves by soaking their feet regularly, oiling their skin to make it softer, and checking daily for any wounds. By following these self-care exercises, injury and further disability can be avoided. Customised mobility aids and special protective shoes are also available for people that need them.

A diagnosis of leprosy can also affect a person emotionally and economically. Stigma surrounding leprosy, that dates back to Biblical times, sees entire families having their job opportunities, education, marriage prospects and dreams shattered. TLMN offers counselling and facilitates self-help groups and other opportunities to help people affected by leprosy to live life to the full.